A Project of the Manship School of Mass Communication

Ask Not: A documentary film on "Don't Ask, Don't Tell" policy
- A film on immigration: Sin País (Without Country)
- Change the Language, Change the Beliefs: Belinda Stillion Southard at
- 5 Types of Online Racism and Why You Should Care
- Megan Kamerick: Women should represent women in media (TED Talks)
- Nadia Al-Sakkaf: See Yemen through my eyes
- InRealLife: Exclusive trailer for a documentary about teens and the internet
- Reframing Normal . . .
- Straightlaced
- Sperm Donor X: Different Conception
- The 3 deadliest words In the world - "It's A Girl": Evan Grae Davis at TEDxGateway
- Body typed
- Out at work: an award-winning documentary on GLBT issues at workplace
- A women's rights movie trailer: The Purity Myth (2011)
- World children's festival 2011 in Washington D.C.
- Read Me Differently
- Native TV News Source
- Yidl in the middle: Growing up Jewish in Iowa
- Out at work at trailer
- "Black is Beautiful" and the doll experiment
- Maid in America
- No dumb questions
- Kissed by Lightening
- American immigrant
- Youth Radio campaigns for saving public broadcasting
- Race & Achievement
- Gay Right's Debate
- Documentary trailer: RACE
- Women and Media: Women in media: Diversifying voices, strengthening coverage
- Baseball Girls: A feature documentary on women in baseball
- New PBS documentary: The Black Press and the Civil Rights Movement
- Gwen Ifill talks about "The Breakthrough: Politics and Race in the Age of Obama"
- Toni Morrison discusses "A Mercy" with NPR correspondent
- "Amazing Grace: Just the Black Notes!"

A film on immigration: Sin País (Without Country)

About this film (Source: New Day Digital): Sin País (Without Country) attempts to get beyond the partisan politics and mainstream media's 'talking point' approach to immigration issues by exploring one family's complex and emotional journey involving deportation.

In 1992, Sam and Elida Mejia left Guatemala during a violent civil war and brought their one-year old son, Gilbert, to California.  The Mejia’s settled in the Bay Area and raised their family for the past seventeen years--until one morning immigration agents stormed the Mejia’s house, looking for someone who didn’t live there.

Sin País begins two weeks before Sam and Elida’s scheduled deportation date. After a passionate fight to keep the family together, Sam and Elida are deported back to Guatemala.

With intimate access and striking imagery, Sin País explores the complexities of the Mejia’s new reality of a separated family–parents without their children, and children trying to succeed in life without their parents.

Ask Not: A documentary on "Don't Ask, Don't Tell" policy 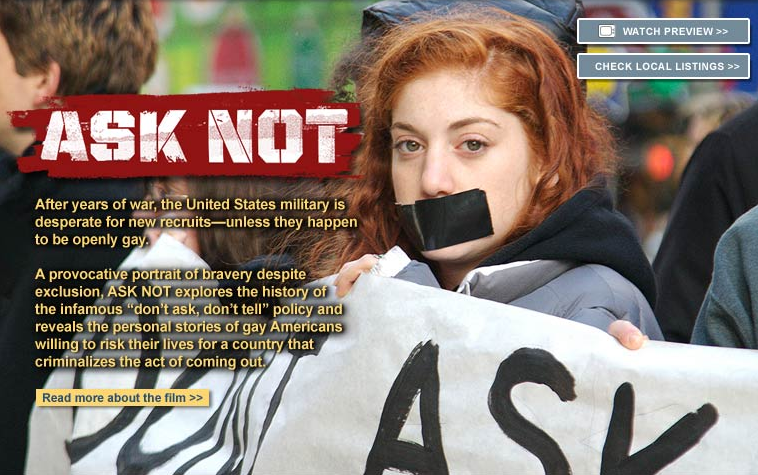 Click here to watch the trailer of this film

About the film (Source: PBS): Homosexuality is the last target of official discrimination in the U.S. armed forces. When President Bill Clinton took office in 1993, his campaign pledge to lift the ban on gays serving openly in the military became a heated issue, with military leaders, Christian fundamentalists and conservative Congress members expressing vehement opposition. A sociologist at Northwestern University proposed the "don't ask, don't tell" (DADT) policy as a compromise . . . Read more

TEDxUIllinois - Dr. Lisa Nakamura - 5 Types of Online Racism and Why You Should Care

InRealLife: Exclusive trailer for a documentary about teens and the internet 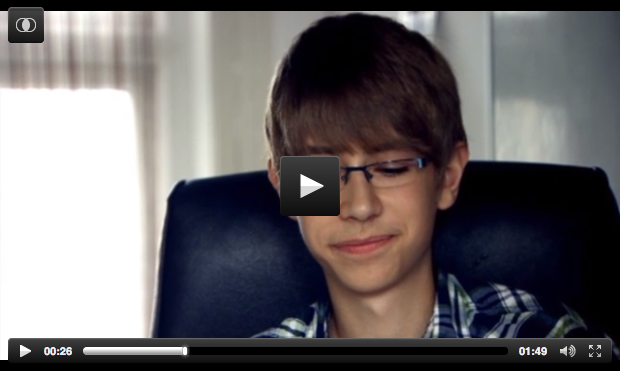 Synopsis (Source :groundspark.org) - From girls confronting popular messages about culture and body image to boys who are sexually active just to prove they aren't gay, the students in Straightlaced illustrate the toll that deeply held stereotypes and rigid gender policing have on all of our lives.

(April 19, 2013) - Sperm Donor X: A Different Conception is a 56-minute documentary that is meant to open a critical dialogue on the changing nature of families in the United States. From the strangeness and humor of picking an anonymous donor to the creation of joyous families of both biological and adopted children, SPERM DONOR X: A Different Conception provides a powerful challenge to old ideas about making a family.

The film follows the director and three other women over years, as they move from fear and self-consciousness to gratitude and celebration. The women face a variety of issues as they deal with parents, finances, new and old boyfriends and a fundamentalist Baptist Church as they fulfill their wishes to not miss out on parenting. These women speak for thousands of others as this documentary adds depth and insight into the new options facing women today.

FILMS ON DIVERSITY
The 3 deadliest words In the world - "It's A Girl": Evan Grae Davis at TEDxGateway

It’s a Girl is a documentary film that tells the stories of abandoned and trafficked girls, of women who suffer extreme dowry-related violence, of brave mothers fighting to save their daughters’ lives, and of other mothers who would kill for a son.

Global experts and grassroots activists put the stories in context and advocate different paths towards change, while collectively lamenting the lack of any truly effective action against this injustice. This is a timely film given the recent spotlights on treatments of women in places like India and Afghanistan. In many places in the world, girls are abandoned or killed in infancy simply because they are girls. When they do manage to grow up, some may face extreme violence or death at the hands of their own husbands or family members.

Rooted in centuries-old traditions, sustained by deeply ingrained cultural dynamics, which, in combination with government policies, accelerate the elimination of girls, the war against girls and women is explored and examined in this compelling and timely film. Viewers will see why the three words “it’s a girl” remain the deadliest in some parts of our modern world. More info

Sundance award winning filmmaker, Jessica Erica Epstein, has recently released Body Typed , A Film in 3 Parts, currently available in DVD and on line streaming from New Day Films. The three short films use humor to introduce serious discussion and critical thinking about media and physical perfection. For additional information about the film, a preview, and purchasing of the DVD or streaming access, please go to this site

Maybe Baby is an award-winning documentary by independent filmmaker, Shannon O’Rourke. The film is about single motherhood in the 21st century. Single motherhood by choice is a vast and underrepresented world. Maybe Baby explores this choice by following four separate women on their individual journeys through Assisted Reproductive Technology (ART) to produce families of their own.

The reality is that there are over 13 million single parents, mostly women, raising over 22 million children (representing over a ¼ of the children under 21) in the United States. Maybe Baby should incite important discussions about the conflict between our personal choices and societal stereotypes and pressures and bring to light basic human questions of life, love, fertility, and the modern definition of family. More info.

Out at work: An award-winning documentary on GLBT issues at workplace

About the documentary (Source: AndersonGold Film) In 1992 Cheryl Summerville, a cook at a Cracker Barrel restaurant outside Atlanta, received a termination paper stating that she was fired for "failing to demonstrate normal heterosexual values." Read more


In this video adaptation of her bestselling book, pioneering feminist blogger Jessica Valenti trains her sights on "the virginity movement" -- an unholy alliance of evangelical Christians, right-wing politicians, and conservative policy intellectuals who have been exploiting irrational fears about women's sexuality to roll back women's rights. (Source: Media Education Foundation)

Religion and Film
Yidl in the Middle: Growing up Jewish in Iowa
by Marlene Booth
(Source: New Day Film) - Yidl in the Middle looks at growing up "different" in America. In this film, filmmaker Marlene Booth probes her Iowa-Jewish roots. Through home movies, period photos, her high school reunion, and current interviews, Booth examines the complicated process of negotiating identity -- as an American, a Jew, and a woman. More details about this film.


Sexual Orientaion
Out at Work Trailer

Plotline: In 1992 Cheryl Summerville, a cook at a Cracker Barrel restaurant outside Atlanta, received a termination paper stating that she was fired for "failing to demonstrate normal heterosexual values." She was shocked to discover that in more than 40 American states it was legal to fire workers simply because of their sexual orientation.

OUT AT WORK chronicles the stories of a cook, an auto worker and a librarian as they seek workplace safety, job security and benefits for gay and lesbian workers. It was originally produced in 1996. But it was updated in 2009. It is a 56-minute, color film available in DVD format.

"Black is Beautiful" and the doll experiment

Maid in America
(PBS Independent Lens) - Maid in America is an intimate, eye-opening look at the lives of Latina domestic workers, who came to the U.S. to pursue their "American Dreams." Anayansi Prado is the director and Kevin Leadingham is the producer of this movie. Read more | For educational use

By AD Avila
Produced for the Information Stories project: Sustaining Democracy in the Digital Age.
Originally posted on January 31, 2011

(Feb. 17, 2011, Source: youthradio.org) - At this moment, Congress is considering serious cuts in funding for all public broadcasting, even though more than half of all Americans enjoy NPR, PBS and other public media web sites every month. Read more
Repost on Huffington Post


Reaction from Americans
for Truth About Homosexuality (AFTAH)


Synopsis
(Source: National Film Board of Canada) - This feature documentary has used "animation, archival stills and live-action footage to detail the history of women's participation in the largely male-dominated world of baseball and softball." Lois Siegel, who directed this film, is a freelance film director, writer and photographer. She teaches video production at the University of Ottawa. Click here to read more about this film.


A new PBS documentary about The Pittsburgh Courier by Ronald Love, former filmmaker for National Geographic magazine, is scheduled to appear on PBS stations throughout the country. Titled "Paper of Record: The Pittsburgh Courier, 1907-1965," the film has won a CINE Golden Eagle Award for excellence in the visual arts.

The documentary tells the story of the leading black newspaper of the last century. It was both a journal of African American life and a muckraking crusader in the vanguard of the civil rights movement.

Patrick Washburn, professor in the E.W. Scripps School of Journalism at Ohio University and author of The African American Newspaper: Voice of Freedom, served as a consultant for the production. In the video below, Washburn discusses his role as historical consultant for the documentary.


Gwen Ifill talks about her book
The Breakthrough: Politics and Race in the Age of Obama