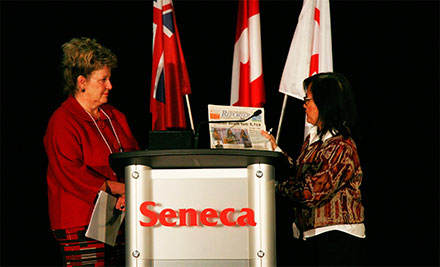 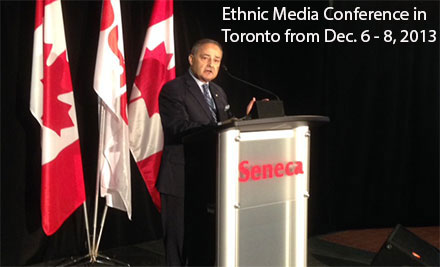 Canadian journalists participate in a workshop at the professional development conference organized by NEPMCC. 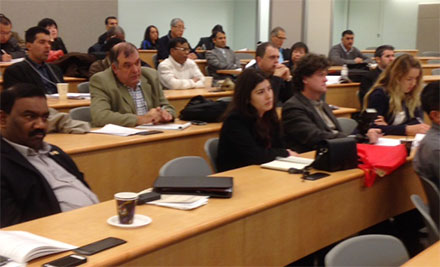 By Maria Voutsinas
(Repost from the NEPMCC's website) - The weekend of December 6th to December 8th brought together 300 members of the National Ethnic Press and Media Council of Canada, from across Canada, to the beautiful Seneca Markham Campus. With the generous support of Canadian Heritage and The Honourable Shelly Glover, TD Bank and Seneca College, and under the leadership of President and CEO, Thomas S. Saras, this successful seminar allowed our members the opportunity to sit in on lectures and plenary sessions from some of the greatest minds in Journalism, Business and Politics.

Click here to see more pictures from this conference.

From the kick-off, which was led by "The Queen of Networking" herself, Dr. Donna Messer, to the exemplary plenary sessions by the Leader of the Provincial NDP, Andrea Horwath, Chief Commissioner of the Ontario Human Rights Commission, Barbara Hall,and The Canadian National Defence, our members were engrossed in 3 days of enlightening words of wisdom.

In the midst of all the learning, The NEPMCC hosted a Gala Dinner at the College which was a way to unwind, and network. We were entertained by a dynamic duo of MCs: Former MPP Tony Ruprecht, and Roberto Hausman, the "King of Diversity". After the opening remarks by the Chair of Seneca College's Board of Governors, Colleen Fleming, and Mr. Saras, politicans from all stripes and levels of government brought Season's Greetings. We were joined by The Honourable Chris Alexander, Minister of Citizenship and Immigration, MPs Andrew Cash and Olivia Chow, MP Jim Karygiannis, The Honourable Michael Chan, MPP, Minister of Tourism, Culture and Sport, MPP Todd Smith, and The Mayor of Markham, Mr. Frank Scarpitti. Members and their families listened to fantastic live music, ate delicious food, and sipped on Romanian Wine which was supplied by our friends at Oblio International, with thanks to the Romanian Consulate in Toronto.

This conference's success lies in the organizers, comprised of Mr. Thomas S. Saras, Dr. Gabriel Huston, Tatyana Fursenko, Maria Saras-Voutsinas, and our partners at Seneca College. None of this would have been possible without the fantastic volunteers, educators and staff that gave their all to ensure an experience that each and every member that attended vowed to never forget.

The National Ethnic Press and Media Council of Council is comprised of 650 ethnic media outlets from across Canada. To learn more about our Council, and to become a member, please visit http://www.nationalethnicpress.com/ or www.nepmcc.ca

Dr. Izard conducted the as part of the 2nd professional development conference and training seminar in journalism organized by the National Ethnic Press and Media Council of Canada (NEPMCC).