By Donovan Longo
(Aug. 7, 2013 | Latin Times) - Facebook's policies regarding offensive content on their social media site are being tested. Devoutly religious followers are claiming that a community page is targeting Christianity with direct hate speech. A group of Christian activists from a Wisconsin-based ministry are lobbying Facebook to remove the community page, “Virgin Mary Should’ve Aborted,” stating that it violates the website's policies against hate speech. Read more

(Aug. 6, 2013 | Pew Forum) - No religious group in the United States has released an official statement on radical life extension. However, here are brief summaries of how some clergy, bioethicists and other scholars from 18 major American religious groups say their traditions might approach this evolving issue. Read more

(Aug. 3, 2013 | GMA News) - Practicing Muslims may soon go high-tech with the upcoming launch of an Islamic smartphone that claims to reconcile the Koran with modern science. Dubbed the Peace Mobile, the phone is a customized Android device that features Islam-oriented apps and content and is priced at $240, Arab News reported. Read more

By Jacob Mchangama (Summary by Debra Mason)
(Fox News | May 31, 2013) - Recent years have seen increasing demands from governments and individuals that free speech should be limited – both in the West and in international law, in order to protect religious sensitivities.

In a global world this conflict has become explosive as cartoons published in Denmark and videos uploaded in America have led to violent riots from Cairo to Karachi. The outcome of this battle will have profound consequences for the ability of people everywhere to freely express themselves and follow their beliefs. Read more

By Aline Mayard (Summary by Debra Mason)
(Wamda | April 2, 2013) - Lately, it seems as though we often hear about a revolutionary new DIY idea like the Raspberry Pi Do-it-Yourself computer, or a successful crowdfunding campain to commercialize an affordable tool like the 3Doodler printing pen; essentially, we’ve been hearing a lot about the hacker/maker movement.

Now, with makerspaces cropping up across the Arab world, hopefully we can expect to see of these stories coming out of the region. Many that have launched in the past two years claim an agenda to make the world a better place by letting anyone, of any age, profession, or background, use a 3D printer and make their own electronic circuit. Read more 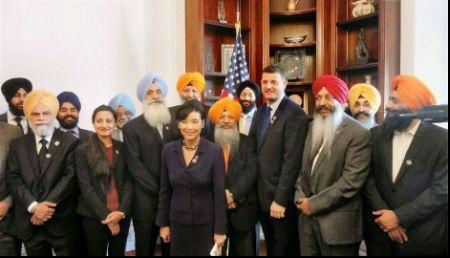 Photo Credit: The Times of India

(April 26, 2013 | The Times of India) - With their distinctive, colourful turbans, their storied industry, and their expansive presence all over the world across a range of professions, Sikhs are easily India's most prominent ethnic community.

On April 25, the community that has also given India its 13th - and first Sikh Prime Minister, established its voice on Capitol Hill, seat of the US legislatures, with the formation of the Sikh Congressional Caucus aimed at ensuring they get a fair hearing in a country where they began settling more than 100 years ago. Read more

(April 25, 2013 | Source: Christian Science Monitor) - When the bombs at the Boston Marathon exploded a week ago Monday, a familiar chain of events and emotions unfolded for many in the American Muslim community: shock and grief, followed by an unspoken dread that the perpetrators could be Muslim; condemnation of the attack; fear of reprisals – and of being conflated with the acts of violence; and quietly, an inward examination of what went wrong. Read more


For Indonesian atheists, a community of support amid constant fear

(April 26, 2013 | New York Times) - Karina is an atheist, but her friends jokingly call her “the prophet.” That is because she is helping nurture a community for unbelievers in predominantly Muslim Indonesia, where trumpeting one’s disbelief in God can lead to abuse, ostracism and even prison. Read more.

Islamists in Russia: The Boston bombs have put new focus on Russia’sIslamist republics

(April 22, 2013) - Ten years after the 9/11 attacks, a Pew Research Center survey painted a complex portrait of Muslim-Americans living in the United States.

Among adults, 63% were born abroad and a quarter of the entire population — an estimated 2.75 million in all — had arrived since 2000. Of those surveyed, 60% feared the rise of Islamic extremism in America; 21% believed there was support for extremism among Muslims in the United States; and opinions were split between those who believed the “War on Terror” was a sincere effort to combat terrorism versus those who felt it had other motivations. Read more 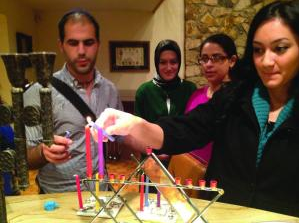 Jewish and Turkish Muslim members of Young Peace
Builders at a joint religious and educational program
(Photo via The Jewish Week).

By Steve Lipman
(April 10, 2013 | The Jewish Week) - Hayrunnisa Kalac, a teenager from northern New Jersey who attends high school in southern Brooklyn, stepped into a taxi outside of Port Authority Bus Terminal Sunday morning and told the driver her destination: the Museum of Jewish Heritage – A Living Memorial to the Holocaust in Battery Park City. Read more

By Voices of NY
(March 11, 2013 | Voices of NY) - For the grandson of Holocaust victims, the anti-Islam posters in subway stations last fall triggered a call to action: starting the crowd-funded advertising campaign “Talk Back to Hate.” Read more

By Amplifyer Webmaster
(Jan. 7, 2013 | Source: Amplifyer) – Before beginning my internship at Arab American Association of New York (AAANY), I was nervous because I was unsure what to expect. Would I be judged as a “bad Muslim”? Would I be labeled as useless because of my inability to speak the Arabic language? Would I even have a meaningful experience? Read more

(Nov. 7, 2012 | Source: Tulsi Gabbard) -
Democrat Tulsi Gabbard won the race for Hawaii's 2nd Congressional District on November 7. With this victory, Tulsi has become the first Hindu to be in the U.S. Congress.

By Debra Mason
(Nov. 5, 2012 | FAIR) - An independent Church of Jesus Christ of Latter-Day Saints (Mormon) group has stepped up its visibility as a media watchdog group. The Foundation for Apologetic Information & Research (FAIR) was founded in 1997, but has been reinvigorated by the attention paid to the church as a result of Mitt Romney's 2012 presidential campaign. FAIR works to defend the Mormon Church and its teachings in the media and online forums.